Employee Compensation Metrics You Should Track and Understand

Employee compensation is often your organization’s biggest operating expense—but it can also be a strategic advantage. Compensation is frequently cited as a top reason for voluntary employee turnover. In fact, one in five job seekers said it was the number one factor for leaving a job in the last year. It’s important to understand how pay is distributed across your team, so you can make informed decisions that will help you attract and retain employees. These employee compensation metrics will give you the insight you need to do just that.

Salary bands are an important piece of an effective compensation strategy, as they spell out the target pay range for each of your job grades. But employees can fall out of their salary bands for a variety of reasons. Bands might be updated to reflect market changes, but employee salaries may not be adjusted accordingly. Or, new employees might negotiate higher starting salaries based on other offers. This can create a myriad of problems for employers.

Percent of employees below salary band

Get ahead of these conversations by keeping an eye on the percent of your employees who are below the salary band for their job grade. This is a very common issue when managers inherit a team, but don’t have insight into how compensation decisions were made in the past. Drill down to see who these employees are, and build a plan to bring them in band.

Percent of employees above salary band

Career development, including opportunities for growth, is another commonly cited reason for voluntary turnover. Your employees want to know they have a future at your organization, or they will look externally for another opportunity.

Above band employees can be an indication that promotions are in order, as they’ve already reached the upper earning potential of their current job grade. Ideally, you would already have a career path and development plan in place to move each employee into the next job grade (and corresponding salary band). If not, there’s no time like the present!

If your company has overlapping salary bands, you may choose to offer promotions to above band employees without an immediate salary increase. Then, create a new development plan to help them gain the skills and experience necessary to increase their salary and eventually move into the next job grade.

The talent market is tight, and employers are learning that they often have to make more competitive offers to win the talent they need. As a result, newer employees often earn more than their longer tenured counterparts—which can quickly damage employee trust and loyalty.

Keep track of salary band adherence by tenure to understand when it’s time to make market adjustments for your longest standing employees. Any large discrepancies may also be an indication that it’s time to revisit your salary bands to better align with market expectations.

Functions generally above or below band

Functions generally above band may be an indication that market compensation is moving beyond your salary bands, and that it’s time to re-evaluate them. This is often the case for the most in-demand talent, like engineers. Adjusting your salary bands will ensure you remain competitive, so you can continue to attract and retain talent.

Functions generally below band could be a warning sign for future attrition. Once one person gives notice, they may very well share what they’ve learned about market compensation rates with fellow employees, creating a domino effect of turnover. Or, a manager may leave and poach their former team from your company with more competitive salary offers. Avoid losing an entire department by bringing employees in band.

Compa compares an employee’s salary to the midpoint of the salary range for their position. The Compa for a salary that’s exactly in the middle of the range would be 1.0, which is typically considered appropriate for a fully competent employee. Top performers are usually between 1.0 and 1.15, while less experienced employees are typically between 0.85 and 1.0.

Comparing Compa ratios by group can provide meaningful data about the distribution of compensation at your organization. Begin by looking at Compa by tenure, function, gender, and ethnicity.

This takes salary band adherence by tenure a step further to show you how early and recent hires compare, even if they’re all in band. If you find that new hires have a higher median Compa ratio, you’ll know you need to focus on early employees whose compensation may have fallen behind.

Again, looking at compensation distribution from both the salary band and Compa angles will provide stronger insight than looking at only one. While all employees may be in band for a given function, Compa can show how they’re distributed within that band. 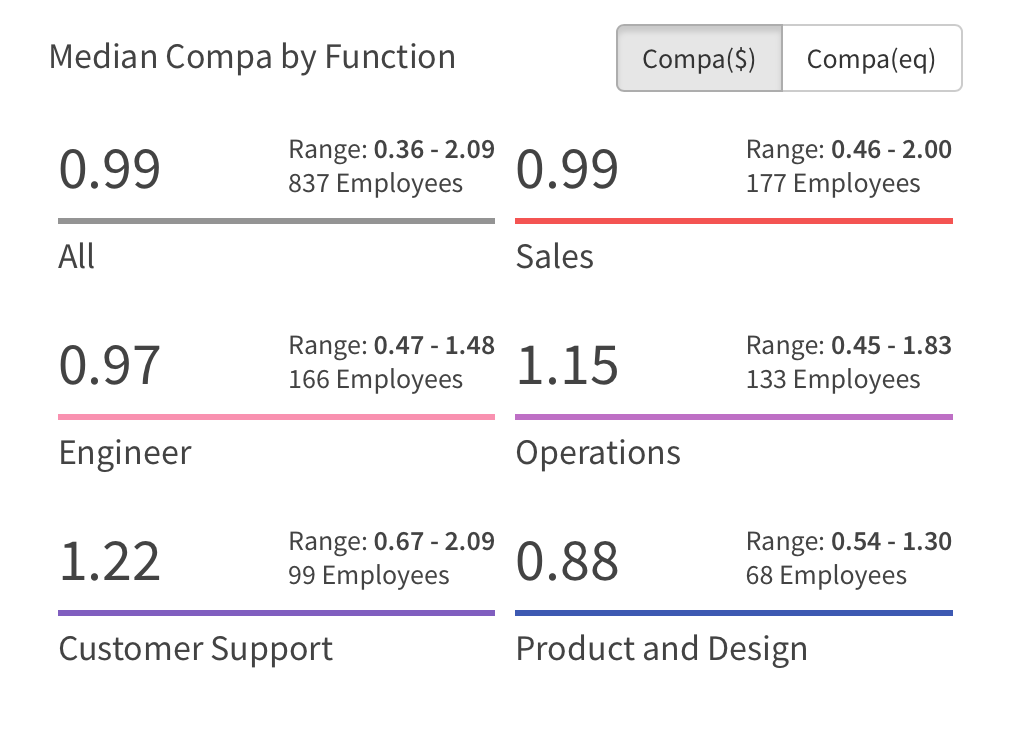 A Compa below 1 for an entire function should indicate a more junior team. Dig in to your data to determine if that’s the case. If so, you may need to consider developing your team, or hiring more senior-level employees, to help with succession planning. Otherwise, it could mean ranges recently increased, but compensation wasn’t adjusted. Some pay increases may be in order to bump up your highest performers and most loyal employees.

Also consider how each employee is ranked in terms of Compa, and whether it’s appropriate. It’s not uncommon to find a top performer with a lower Compa than an average colleague, especially within inherited teams.

Compare Compa by gender and ethnicity to learn how different groups compare. Dig in where you see any discrepancies to determine why they exist. A low Compa score for underrepresented groups may be due to an unconscious bias, which should be remedied. It may also be purely coincidental, due to a small population size for that group, which happens to consist of entry-level employees. Even in that case, you can make an effort to increase that group’s representation in talent pipelines for higher level roles.

Also look at Compa for different groups by function. This can point to problems in specific departments, such as lower salary band penetration for underrepresented groups.

Other compensation metrics to track

In addition to salary band and Compa metrics, keep track of your average salary for ethnicity and gender, and employee vesting progress.

Average salary by ethnicity and gender

Average salary is another important angle from which to view pay equity at your organization. Employees from underrepresented groups may be in band with acceptable Compa ratios for their roles, but still have a lower average salary than all employees. 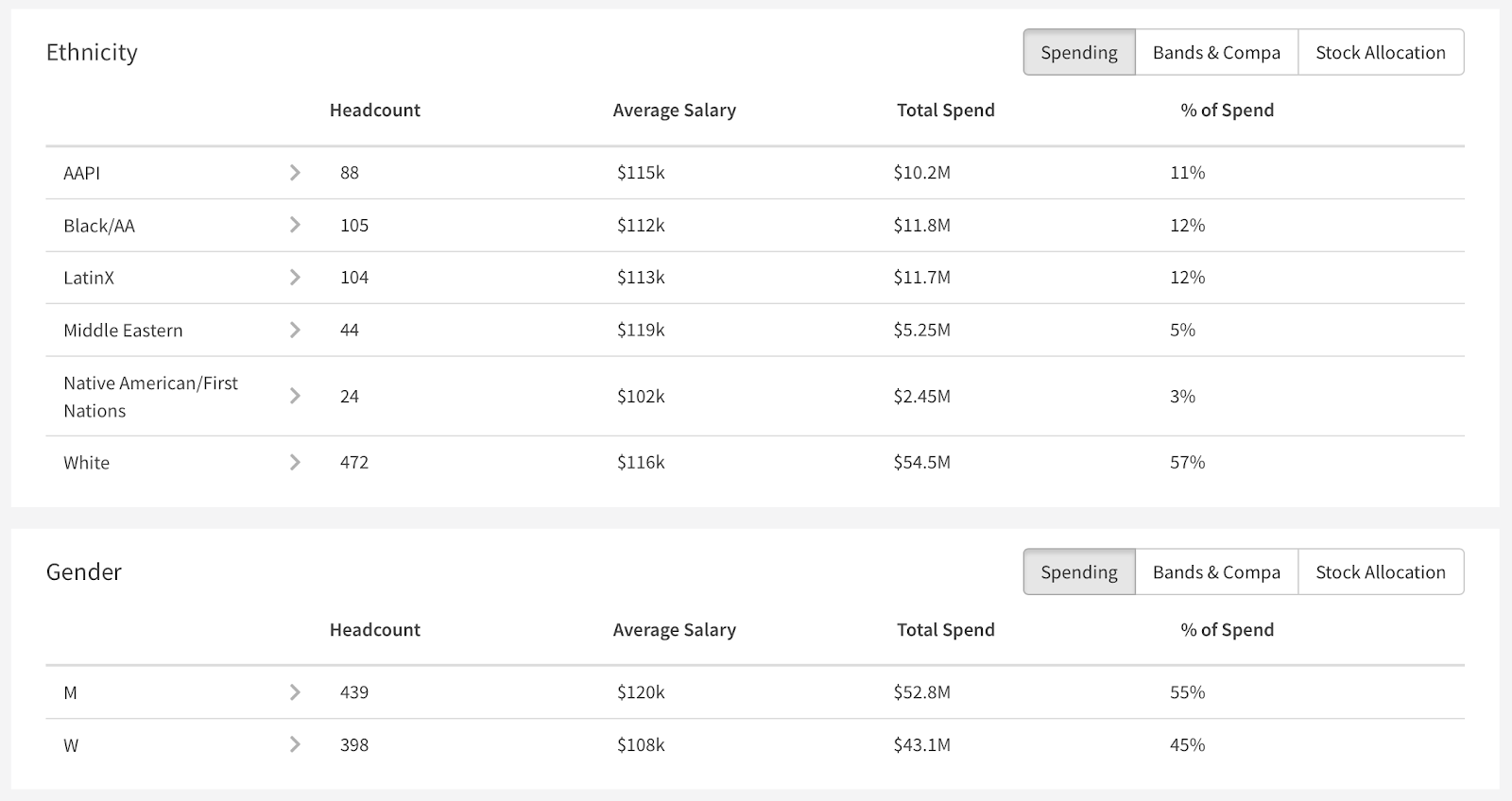 As equity vests, employees are less incentivized to stay at their organization and may move on to other opportunities. Keep track of the number of employees who are 50 percent, 75 percent, and 90 percent vested. You may be able to retain these employees with some extra attention, promotions, additional equity grants, or salary adjustments.

Understanding, tracking, and acting on these compensation metrics can help your organization make more informed decisions with regard to hiring and retaining employees. Over time, you will want to see fewer employees above or below band and fewer differences by gender and ethnicity. You will also want to see less voluntary employee turnover caused by low compensation, lack of career development, and vested stock options. With the right data, compensation can become your organization’s strategic advantage. 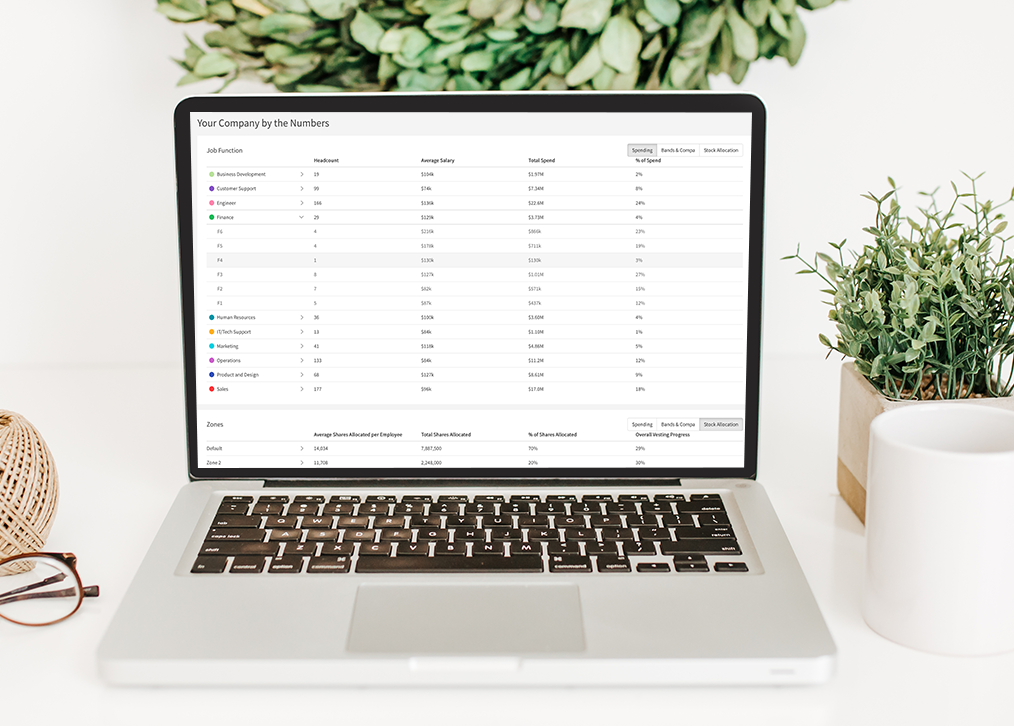 Stop drowning in spreadsheets and get back to the business of human connection.

These Stories on Compensation Strategy

Common Compensation Mistakes—And How to Fix Them